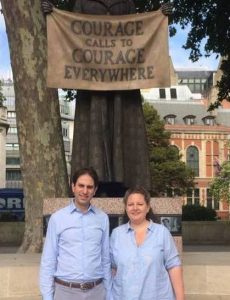 In June 2018 Rebecca Steinfeld and Charles Keidan finally received the legal ruling they had been seeking. By a unanimous vote, the five judges of the Supreme Court, the highest court in the United Kingdom, ruled that the Government’s refusal to allow opposite sex couples to have civil partnerships ‘incompatible’ with human rights law.

The issue was whether the bar on different-sex couples entering into civil partnerships breached the appellants’ rights under article 14 (the prohibition on discrimination) together with article 8 (the right
to respect for private life) of the European Convention on Human Rights (ECHR). Lord Kerr, speaking on behalf of all five judges ruled that it did.

The full statements made by Rebecca and Charles, outside the Supreme Court after their victory, can be found on our Latest News page.

Background to the case

In October 2014, London-based couple Rebecca Steinfeld and Charles Keidan tried to form a civil partnership at their local registry office – Chelsea Town Hall in London – but were told that they couldn’t because they were not of the same sex – civil partnerships are restricted to same-sex couples only.

Following this refusal, Rebecca and Charles launched a legal challenge in December 2014 in the form of a Judicial Review at the High Court.

Over 3 years later, their case was heard in May 2018 in the UK’s Supreme Court, which concentrates on “cases of the greatest public and constitutional importance”. 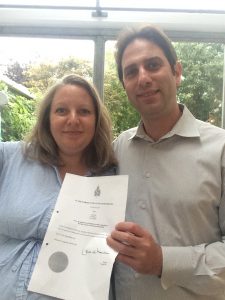 Ms Steinfeld and Mr Keidan with the court’s permission