More than half of respondents (52%) to a Scottish government consultation on civil partnerships think they should be extended to different-sex couples. 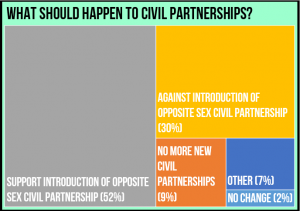 “The results of the Scottish government’s consultation adds to the momentum behind our call for the extension of civil partnerships to different-sex couples. This summer the Isle of Man introduced different-sex civil partnerships and over 70,000 people have signed our petition asking the British government to do the same. We’re simply asking that more people are given a choice over how their relationship is expressed – something a lot of people can get behind. As more and more people support the cause, the demand will be harder to ignore.”

Currently in Britain all couples can marry but only different-sex couples can get a civil partnership. Amongst the European nations that have introduced same-sex marriage, Britain is unique in still reserving one form of union to one type of couple. The Equal Civil Partnerships Campaign is calling for that anomaly to end. The campaign argues that many couples would like the legal protection of marriage but don’t feel the ceremony or institution is right for them.

The campaign is backed by organisations such as The Equality Network, Progressive Women, and Humanist Society Scotland, by campaigners including Owen Jones, Peter Tatchell, and Ellie Mae O’Hagan, and politicians including Green Party Co-Leader and MP Caroline Lucas, the Women’s Equality Party, Tim Loughton MP, and Alistair Carmichael MP.